Darragh’s wide-angle entry into our 2009 Underwater Photo Competition was a winner on more than one count. His sharp image of a monkfish being snapped by another diver was taken near Inis Boffin, on a Scubadive West Island Dive Safari. This photograph was awarded first prize in the Wide Angle Category, while also catching the eye of Sport Diver magazine’s editor, Mark Evans. This canny editor knows a great cover shot when he sees one, and quickly commissioned the photo for the November issue of Sport Diver. Darragh has been catapulted into the world of commercial underwater photography, and no better man for the job we say (well he is from the People’s Republic of Cork!).

Take a look below at the original photo, and then how it currently appears on Sport Diver magazine’s cover. Watch out for details of our 2010 Underwater Photo Competition, and see if you too can capture our eye! 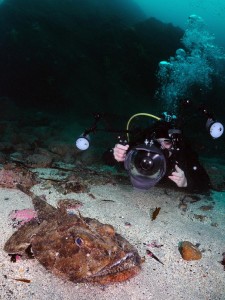 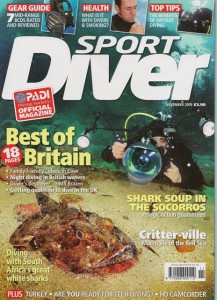