Anyone in attendance at Scubadive West on Saturday witnessed an heroic sporting achievement. Aedan O’Ruanaidh, a keen diver with Dalkey Scubadivers, swam the entire length of the Killary Fjord to Scubadive West in less than five hours.  Aedan entered the water at Ashleigh Falls, the start of the Killary Fjord, just after eight on Saturday morning. Armed with high-energy foods and fluids Aedan powered past such familiar landmarks as Sleepzone Hostel, Rossroe Pier and Inis Barna.  Rounding the final corner and into view of Scubadive West, Aedan battled a strong offshore wind. His support crew watched anxiously as Aedan dug deep and blasted through the final half-mile. Aedan exited the water at Scubadive West tired yet jubilant.

Aedan’s swim is an extraordinary achievement, covering an approximate distance of ten miles; from the start of the Killary Fjord to the cove at Scubadive West, NON-STOP! 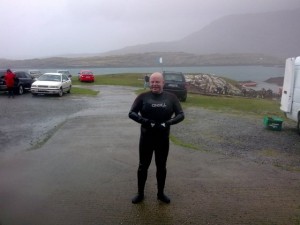