While Ireland tackled England on the pitch yesterday, twelve fearless divers answered Ireland’s call and faced the indomitable Streamstown Drift. This month’s squad was made up of seasoned drifters and some newcomers to the game. Fast play and swift moves were the order of the day, with Streamstown rejoicing in its reputation for speed. A fine day and weeks of settled weather ensured great water clarity in Streamstown Bay. Our plan allowed for a “game of two halves” (nonsensical phrase!); air and tide generally permits two runs at the drift dive. However, yesterday saw a handful of our team desert at half-time, in a bid to view the rugby game. Those who played on were rewarded with a second whimsical underwater journey and post game snacks of hot chocolate, and Creme Eggs. 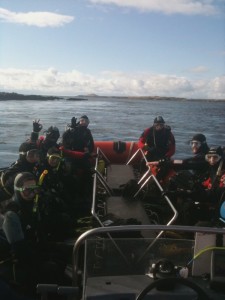