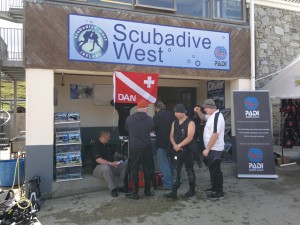 A letter to us from Cristian Pellegrini, DAN Europe.
‘First of all, I wish to thank you for the interest you show in DAN’s research projects.
We do our utmost to spread a culture of safety among divers, worldwide. And it’s very rewarding
to meet people like you guys who understand the importance of research and safety and get involved’.

Cristian also attached some information about their work and the research that they conducted at Scubadive West..

DAN Europe’s Research division participated as Educational Partner in the recent
2011 SCUBAPRO Day at Scubadive West, located in beautiful Connemara on Ireland’s west coast.
Steve Clark, our Training coordinator for UK & Ireland, was onsite all weekend (11th and 12th June), dealing with divers who volunteered to give their data to DAN Research. Among Steve’s scientific tasks, the gathering of data and analysis of circulating gas bubbles, trying to identify the best ascent profile. Tests and measurements included Carotid Artery Doppler Screening, pre- and post-dive questionnaires, download of Dive Profiles.
Steve had a busy weekend, with over 55 sound files and research daily logs to enter onto the DAN system.
Professional and recreational divers had the opportunity to learn more about diving safety matters, by getting involved in the scientific projects conducted by the DSL (Diving Safety Laboratory), a real mobile research laboratory whose goal is to make diving a safer and injury-free sport.
Founded in 1983, DAN Europe (Divers Alert Network Europe) is an international non-profit medical and research
organization dedicated to the safety and health of recreational scuba divers. No other organization in the world shares this mission.
DAN Europe provides research, information and assistance for the benefit of its members and the diving public:
 emergency medical advice, with over 16.000 emergency calls handled every year and assistance for underwater diving injuries co-ordination of hyperbaric and medical services (over 180 DAN doctors, the best specialists
in their respective countries, at disposal on a 24/7 basis; hundreds of hyperbaric chambers selected according to safety and reliability criteria) tailor-made insurance covers for divers, plus a global network of diving lawyers, ready to offer legal advice the most accurate, up-to-date and unbiased information on issues of common concern to the diving public DAN Europe realized long ago that better results in research only come from extremely large numbers of data, dives, and observations reflecting the real, multifaceted diving world.
The challenge thus lies in involving divers: making them an active part of research, able to precisely record their dives, following an epidemiologically and scientifically correct methodology.
Their data are sent to DAN’s central database, where scientific analysis can be performed on the many aspects of diving safety, ranging from the diver’s behaviour and condition to the safety of decompression procedures. This database is continuously growing, serving as platform as well as tool to confront future findings, special research projects results, different typologies of dive profiles.
Sound facts and not mere opinions about the safety of diving, at last!

We at Scubadive West would like to thank Steve Clark and James Stockdale, DAN Europe, who conducted the research, and to all the volunteer divers who took part, also a big thank you to Sebastian Jurek our Polish Divemaster trainee who explained to the many Polish divers present what we were doing, and of course they all volunteered with aplomb once they understood why we wanted to listen to their hearts! Dziekuje bardzo!