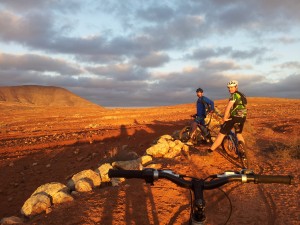 Long shadows on the high trails

The old saying  ‘a change is as good as a rest’ rang true on an action packed 7 days in the Canaray islands.  A daily schedule of : early morning run (optional!), followed by sea swim, – followed by cafe con leche (essential!) and finally an evening mountain biking adventure, ensured that combined with healthy eating – it was better than any rest! A high mountain pass and a spectacular descent

Photo taken at the top of the high pass to Cofete, one of the many spectacular trails that we discovered. The hair raising descent is just visible (behind the guys heads)  meandering around the hill and re-emerging down at the left of the photo. Helmets on lads! suspension open, saddles down and away on a mesmerizing glide from mountain top to sea level. (click on the photo above to enlarge it) 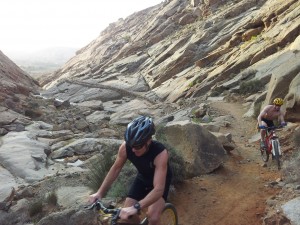 Climbing up through the stunning Mal Paso ravine on the Pajara trail.

The resevoir Presa de las Penitas and Pico De la munda (526m) in the background, our route ahead is just visible, a white line around the mountain.

And on the seventh day ….no, we didn’t rest!…. plenty of time for that on the flight home, …instead we tackled the popular El Cotillo-Corralejo 42km mountain bike spin at a blistering pace. Taking in a nice road ascent from the small fishing port of El Cotillo,  to the quaint village of La Lajares, followed by a steep ascent on loose single track around the dormant volcanoes of Montana Colorado and Calderon Honda. A massive eruption in this area 50,000 years ago contributed to the island expanding by 110 sq. Km. to the North… sheesh, this place is brand new! 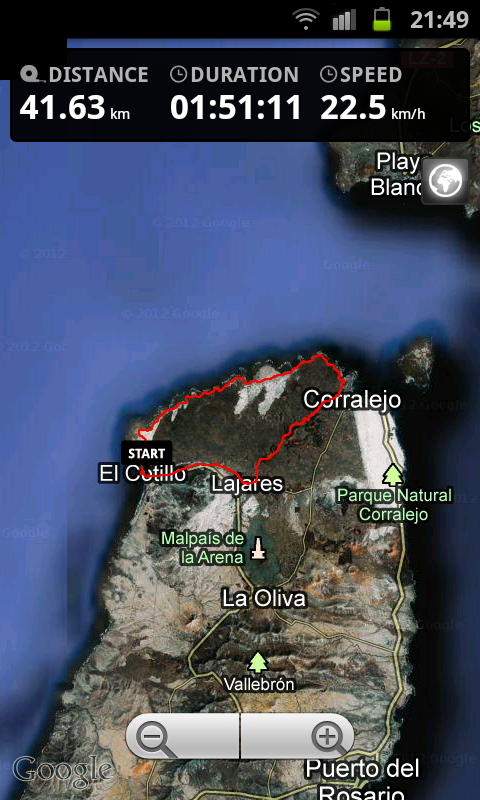 A rugged stone built trail under our wheels now requires the front suspension ‘open’ and our full attention as we climb hard in dead heat! Barbary ground squirrels scurry away from the noise of our rasping tyres (and lungs!) a cheeky native of Africa introduced in 1965. I could spare an almond for the bravest fella, but the shadow of a buzzard overhead sends him scurrying amongst the jumbled lava. 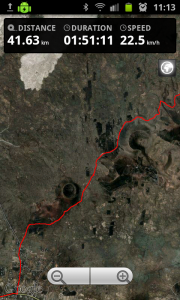 The large crater of Calderon Honda to the left is worth a look ….. a quick look…. as biking in the cool evening and beautiful light means that you have to keep moving… fast.. or you’ll be in darkness before you know it! The Sun won’t linger over the horizon for hours like a balmy June evening in Connemara. It’s January and we are 2000 miles South on the Island of Fuerteventura…. so keep those cranks spinning! 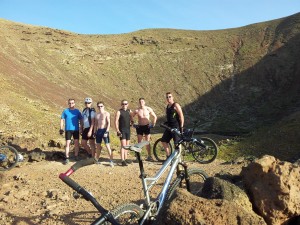 Suddenly the climbing is finished, the ground levels off and we’re onto a fast winding descent heading North on the un-sealed track down to Corralejo. It’s a welcome change of pace. The cool sea air and wide open view towards Lobos and Lanzarote contrast sharply with the close in view of  plants and a small stone built Corral de Los Asnos (donkey pen) that we left just moments ago… but already a few kilometres behind us and 100’s of metres above us. One of the many joys of mountain biking is that your environment can change dramatically in a few seconds and it happens often! A fumble for a drink from the camelpak mouthpiece and then full attention to the descent, its gonna be fast!  It is not as technical (steep, rocky, narrow)  as the other trails we did this week, all the more reason to go for top speed. 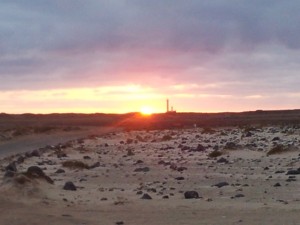 Sandy trail along the North shore

All too soon the trail levels off, we skim the outskirts of Corralejo on dirt tracks and turn left for a 20 Km dash along the stunning Northern coast. This winding track with sandy stretches and  a corrugated surface would blur your vision if it wasn’t for the plush suspension and big chunky tyres! Surfers, windsurfers and kite boarders do battle with the mighty surf all along this exposed coastline as we wrestle with ruts and sand drifts, all the while maintaining top speed.
Cycling with a group, be it on the road or up the side of a volcano, is so much faster and more enjoyable than cycling alone. Aside from the cameraderie and slagging, the un-official mates race is an on going phenomenon and you find that you are pushing yourself, faster than you could imagine… and enjoying it!
The last 5Km run into El Cotillo brings a welcome return to smooth tarmac roads, time to take it easy? ..nah, not likely when you keep company with adventure racers…. It’s a sprint all the way to Vaca Azul restaurant for the avocado and fresh prawns salad!
For accommodation on Fuerteventura contact
Connemara Adventure 087 2767518 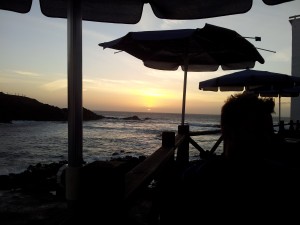