Despite the recent turmoil above water (we’re talking windy weather here, not politics!)… all along the seabed remains tranquil, and new life is abundant everywhere.

On recent underwater excursions we discovered Mermaid’s purses, large whelk egg clusters, juvenile sea hares and tiny new sea urchins in great numbers, proof that the goings on above water are superficial and Spring is on the way! 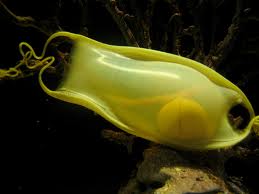 The Mermaid’s Purse or Devil’s Purse encapsulates the fertilized egg of a skate or (some species of) shark. In this case we see the next generation of Lesser Spotted Dogfish Scyliorhinus canicula, a member of the shark family,  in its embryo stage.

Over the next few months the observer will enjoy views of fully formed baby dogfish, preparing to break out into their new world.

When they do emerge the yolk sack is usually still attached and they feed off it for a while as they adjust to their watery environment. 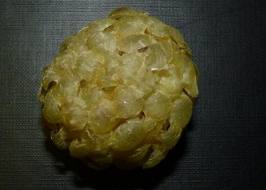 The Dog Whelk is a large predatory sea snail, also known as the Atlantic dogwingle, it bears the scientific name Nucella lapillus.

This carnivorous marine gastropod seems to thrive here in Little Killary and Killary Fjord. They have been busy over the winter as large clusters of whelk eggs are evident in mounds on the rocky outcrops. 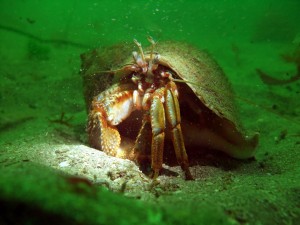 The whelk forms a strong, impressive  shell that endures long after it passes away. Indeed the dog whelk shell is the ‘mobile home’ of choice for large hermit crabs to inhabit. The shell is so popular that an abandoned one is rarely found.

The tompot blenny, Parablennius gattoruginea  favours this shell to deposit her eggs for safekeeping, all the while guarded by the male, who stands sentry, oxygenating the eggs by moving his tail and fins.

For more information  check out our Marine Life webpage!