The diving conditions are fantastic now, with calm weather through the month of June and blazing sunshine for up to 18 hours on many days! The water temperature  is 15 to 17 degrees at the surface, with abundant marine life fantastic visibility of 15 to 20 metres.

No doubt you are planning your next trip to dive with us, so why not whet your appetite with some virtual diving in the meantime! Immerse yourself in ‘Ireland’s Ocean’  a major new four-part ocean wildlife series for RTÉ exploring the wonderful and diverse creatures that live in the seas around Ireland, from dolphins and sharks to plankton and the myriad of tiny colourful creatures that live in our shallow waters.  Some of the footage was filmed at Scubadive West! For anyone who knows Ken O Sullivan’s work, this promises to be a visually stunning treat and a commentary on our diverse waters.

The series looks at the history of man’s relationship with and response to the sea in Ireland, examining the common perception of creatures like dolphins and sharks . are dolphins highly intelligent, sensitive creatures capable of healing sick children? Why are worrying numbers of dolphins washing up dead on our Atlantic coast? Are sharks terrifying animals waiting below the sea surface to eat us? The truth transpires to be quite a surprise and leaves us with considerable food for thought.

In other areas, the series takes us on a journey into wild and the colourful underwater world in the seas around Ireland, encountering an abundance of exotic creatures, many documented for the first time in this area. Throughout the programmes, there is a strong sense of the interconnectedness of life, and natural balance within this world, as creatures depend on each other’s presence to sustain life. 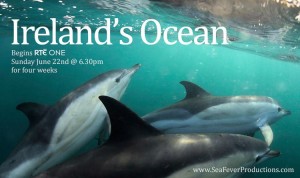