Dates for this dive are available on our website www.scubadivewest.com 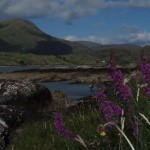 The weekend of 14 & 15th November will see Scubadive West transformed into a knowledge mecca.

Michael Gibbons, renowned archaeologist and expert on Connemara’s history, will run a complementary Maritime Archaeology workshop for those on Saturday 14th’s 10am and 2pm boat dives. Divers will be brought to local, historic sites of interest; including Bronze Age relics and a famine village.  These historic landmarks are on the islands you know and love for diving, Inis Deigil and Inis Barna included.  You will be placed ashore these islands, where Michael will deliver an interactive field trip of the historic treasures contained within. Following each field trip, a dive will take place on a nearby underwater site. This is an opportunity to open your mind to the wonders and secrets of our stunning coastline, plus avail of some excellent winter diving.

The evening of Saturday 14th November will see Cillian Gray sharing his expertise during a complementary “Dive Gear Care and Maintenance” workshop at the dive centre.

Join us afterwards in The Bard’s Den pub in Letterfrack, where the day’s activities can be mulled over with some really great food and diving friends.

The excitement continues on Sunday 15th November with our Streamstown Drift Dive. A relatively early high tide will accommodate those of you with long trips back.  The dive will commence at 2pm, with a pre-dive briefing in the dive centre at midday. 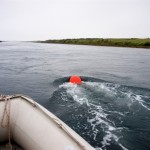 Book your place on this weekend  by contacting us at the dive centre: 095 43922 or [email protected] 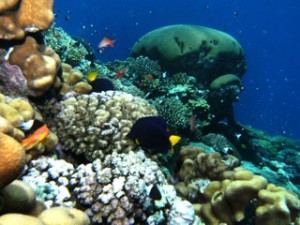 Why: To experience great diving, sunshine and world-class photo opportunities by the bucket load!`

Planning for our 2009 Red Sea Trip started as far back as April 2008.  By February 2009, the 24 spaces had been filled and a waiting list was already in place.  All sorts of bribes were offered to secure a place on this exclusive list; groovy Armada wrecks, labradoodle dogfish, the deeds to the world’s oceans (yes, we were slightly dubious about that one also!) And so came October 14th…time for the chosen ones to depart for “heaven on earth”; included was Cillian Gray, designated Trip Leader Extraordinaire. Those left behind in Connemara remarked upon a unique green tinge to their skin; Eau d’ Envie anybody?!!

So how did it all go??? Words alone cannot do it justice, so thank god for digital cameras.

A 5 hour flight and some onboard snacks brought our divers safely to Marsa Alam airport. The Wadi Lahami mini bus and driver greeted our travel-weary wanderers.  You have heard of ‘Walk Like an Egyptian’, well try on ‘Drive Like an Egyptian’ for size. A 2.5 hour journey to the camp was characterised by much light-flashing, horn blowing and seat gripping. But t’was a journey well worth it. Wadi Lahami is one of the most southern dive locations in the Red Sea; ensuring unspoilt diving, incredible fringe reefs and of course the world-famous Fury Shoals. Next stop Sudan! Diving here does eaxctly what is says on tin, “guaranteeing Red Sea debutants and seasoned visitors the diving experiences of a lifetime.” 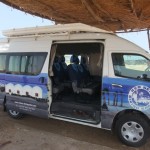 Wadi Lahami Eco-Village is located on a sandy beach, directly opposite the Fury Shoals. Diving would take place daily off the Shoals, and on the inshore fringing reef.  Accommodation was in spacious chalet tents or traditional Madyfa huts. 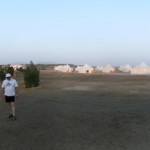 Shoes, socks, sunhats optional; but don’t forget the suncream. Daily air temperatures reached the mid 30’s, while the water averaged a rather agreeable 28oC. (We continue to coax Cillian back into Irish waters less his hot water bottle.)

The subsequent 6 days passed in a frenzy of diving, socialising, eating and some obligatory drinking (well it would be rather rude not to!). But we did manage to garner some details from deliriously happy divers. (words were sometimes garbled, resembling other well known Oxford friendly phrases: “g..ur..rate”, “un..bloody..believable” (bet you won’t find that in a Dickensian novel), and so on and so forth until we got their drift). 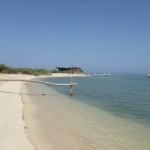 Take me to the Beach

The general running order was something as follows:
6am: Up with the larks for a breakfast of pancakes, cheeses, pastries (and not a bowl of Flahavans in sight).
7am: Boats departed for the two morning dives on the Fury Shoal reefs.  A one hour surface interval between dives took place aboard the boats; where tea and cake were shared, and diving tales exchanged. 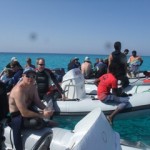 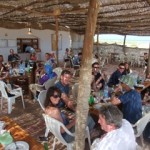 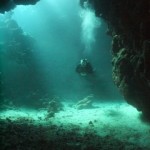 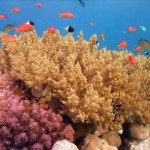 An abundance of colour

A myriad dive sites were visited on this trip; too many to describe them all. But here is a shortened list.
“Claudia” (Fury Shoals): cave system through coral reefs. All caves within easy access to the surface. Sunlight created awesome shafts of light
“Tug” (Fury Shoals) an old tug boat struck the reef in 1940’s; it lies upright with the bow in 8m and the stern in 20m. 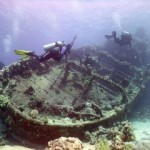 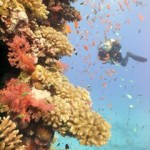 Stockie and a coral dropoff 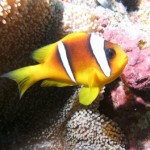 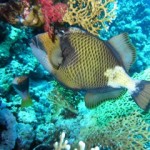 Wednesday 14th October: Back to Reality
Six days of solid diving later, twenty-four tanned Irish divers (as rare a sighting as eskimos in a desert; this blog might double as a springboard for new similes!) departed Egypt.  While this holiday is over, the memories will last a lifetime.
2010 will see us return to the southern Red Sea for more. Book your place in the sun (you never know, you might even feature on camera).
Check out our 2010 Holiday page.